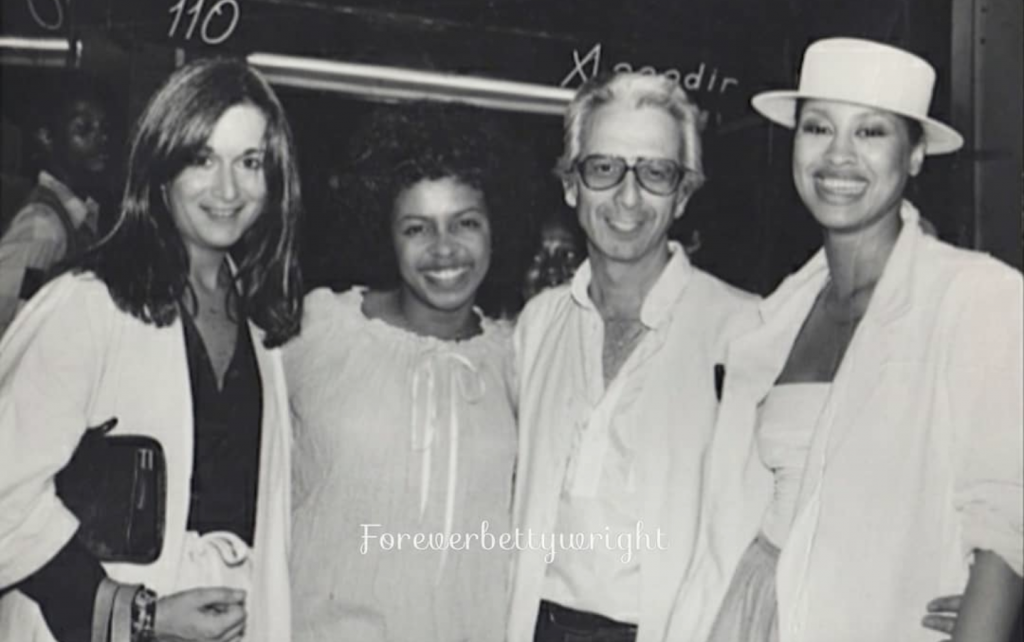 Remembering Betty Wright
By Jason A. Michael
(author of Strength of a Woman: The Phyllis Hyman Story)

I’m going to ask for your indulgence with this post. As many of you know, I worked for soul legend Betty Wright for many years. She passed earlier this month and I have just returned from her funeral in Miami. I’d like to share something I wrote about Ms. B after the service. As Betty and Phyllis were good friends, I hope this will be OK. Before I get to it, I will tell you a little bit about Betty and Phyllis’s friendship. They first met in Miami in the early 70s when Phyllis took a meeting at TK Records, the parent company to Betty’s label Alston Records.

“She was singing in Portuguese and the band was playing and I remember thinking ‘That’s the tallest lady I’ve ever seen,’” said Betty when I interviewed her for Strength of a Woman: The Phyllis Hyman Story. “She was so pretty. She had a scarf on her head like a gypsy and she had shining eyes, I mean big eyes. And she came out of a corner, and you know how you just bowl a person over. She was like, ‘Oh, I always wanted to meet you.’ And she was so friendly to me that I just instantly fell in love with her. She just didn’t meet no stranger.”

From that point on, Betty was a fan. “We started going to see her, I think this place was called Pier 17. The first thing I remembered about her was she played the tambourine with her feet and that she never had on any shoes. Her head was literally scraping the ceiling on the stage. She was like bent over singing, leaning into the mike with no shoes on, and that I remember distinctively. She made some kind of reference about not having on shoes because she didn’t want to go through the ceiling.”

Throughout the years, Betty and Phyllis would often cross paths. In 1980, Phyllis was in Los Angeles working on the Can’t We Fall in Love Again album while Betty was working on her self-titled album for Epic Records. Phyllis added vocals to a song called “Give a Smile.”

Betty was living in Connecticut at the time Phyllis was starring in Sophisticated Ladies on Broadway. Phyllis invited Betty to the show and sent a limo for her. “She found out my husband liked cheesecake and she got this gigantic – I had never seen anything like it – pineapple cheesecake. That was the night she gave me my nickname. She called me Betty ‘H.G.’ Wright. Betty Holy Ghost Wright. She’d tell people, ‘Get straight, get straight, this is Betty Holy Ghost Wright.’ Even if people would describe things about her [behavior or her language], I could never attest to it. I could only speak to Phyllis Hyman that I knew.”

While Phyllis was working on the Prime of my Life album with producer Nick Martintelli in Miami’s Criteria Studios, Betty surprised Phyllis and passed by the studio. “When I got there, it was so funny. She’s sitting with her legs across the chair, you know, sitting backward in the chair singing this song and when I came to the door she just screamed to the top of her voice. We just had a great time and then Nick said ‘You wanna sing on something?’ and he handed me some lyrics. Just automatically, ‘You feel like singing a lil’ bit?’ Thanks to the offer, Betty is heard prominently on the song “When You Get Right Down To It.”

“Phyllis loved Betty,” said Martinelli. “Phyllis never had a bad thing to say about Betty, honey, and if anybody would ever say anything about Betty, she would kill them. Really, she loved Betty.”

Betty and Phyllis saw each for the last time in Los Angeles in 1994. Betty was in town to appear at the House of Blues to promote her new album, B-Attitudes. “We had a conversation on the phone, a couple of days before. She lamented the fact that she’d never had a gold record. I said, ‘What do you mean you never went gold? Did you call RIAA, did they tell you never went gold?’ She said every time it passed 400,000 it would just stop.”

Just days from Phyllis’s birthday, Betty was unsure Phyllis would really show up at the House of Blues. But for Betty, Phyllis rallied. “People were like so astounded to see her. I remember Nick saying, ‘She says she coming. We’ll keep our fingers crossed.’ And she showed up and I promise you, all eyes were on her. People loved that girl. It’s like everybody knew but her. Everybody knew that she was just a phenomenon.”

And now, if you’ll allow, my tribute to Betty.

Saying ‘so long’ to a legend

She was resplendent in silver, sequined and beaded from head to toe, including her glittering pumps, as she lay there in her gold casket. Her hair was curly, full and down around her shoulders. Jet black. She was holding a microphone in her hands. Ready for the stage. In fact, the emcee called it her last earthly performance.

I thought about our 27-year friendship as I sat there socially distanced – for 3 1/2 hours – with tears streaming down my face causing me to frequently remove the suffocating mask to wipe my eyes and ungraciously blow my nose. The tribulations of mourning during a pandemic.

Midway through the service a memory came to me. It from the mid-90s and of another funeral I had all but forgotten about. It was for a neighbor of Betty’s and they had asked her to sing. Lo, her right-hand man, must of have been home in Tallahassee because she asked me to accompany her alone.

Betty Wright could hardly be described as an insecure woman. But she was worried this day. They wanted her to sing Amazing Grace as well as a second song, Bette Midler’s From a Distance. She didn’t feel she knew it well enough, and I helped her with the words in a private room in the back of the big old church in downtown Miami.

I don’t have to tell you she turned the funeral out, much as she turned out every stage she ever stood on. But what came to my mind was not the actual performance but the rehearsal. She needed me that day. And I loved to be needed by Ms. B.

I mean, she was a brilliant mind and a true creative genius the likes of which I don’t expect to ever meet again. I never knew what exactly I had to offer her or what made her, a soul music legend, hire this little know-nothing white boy from Detroit. But she taught me how to run her office, assist her in a myriad of tasks, even how to babysit the kids if needed. And I did it all with vigor. Whatever she required. She only had to ask.

Maybe my greatest qualification was my pure, unadulterated love for her. I was in awe of her and her talent. I basked in her glory and longed to be in her presence. I savored our rare alone time. Her private office space, really a comfortable apartment, was just outside of the recording studio and at the back of the floor her offices occupied above Vision Records in North Miami.

That’s where the action was, where she worked on music day and sometimes night. Creativity literally oozed out of the walls. I loved to watch her work her magic in the booth. A few times, she even let me in the booth myself, as she generously helped me work on demos of songs I had written. I was so honored each time she, a Grammy award winner, would step in afterward and lay down backing vocals to my songs unasked. But that was her. Always giving. To everyone, but especially to those she loved.

And that’s basically what speaker after speaker, between proclamation after proclamation and song after song, said during the lengthy service. Bessie Regina Norris was one of a kind in the best possible way. She gave of her heart, of her time, often of her money and always of her incomparable talent. She shared her gifts with the world and the world loved her.

Unsung, yes, she was. But to those in the know she was a superstar! Her influence is far more reaching that you can even imagine. She worked with virtually everyone in her 50-plus year career. She influenced many and cultivated talent wherever she went.

Though I watched them close her casket and cover it with a spray of pink and purple roses, I still can’t believe she’s gone. She always seemed larger than life to me, virtually indestructible. She was, to me, a real-life superwoman. But, alas, she was just a woman. An incredible woman. But a woman, nonetheless.

It is appointed for men once to die. Though to be absent from the body is to be present with the Lord and if anybody made it to Heaven Betty “Holy Ghost” Wright sure did. She is an angel now, something she was to me for over a quarter of a century. I am so thankful for her and the part that she played in my life.

Thank you, God, for Ms. B and thank you. Ms. B, for the many things you’ve done – as your song says – and please keep watch over me always. I love you, as I know you know, with all of my heart. You will live as long as there is music and that is why I will never say goodbye. Only so long for now. I know you’re singing up there already. Only no more of those Pain songs – except on request from the King.