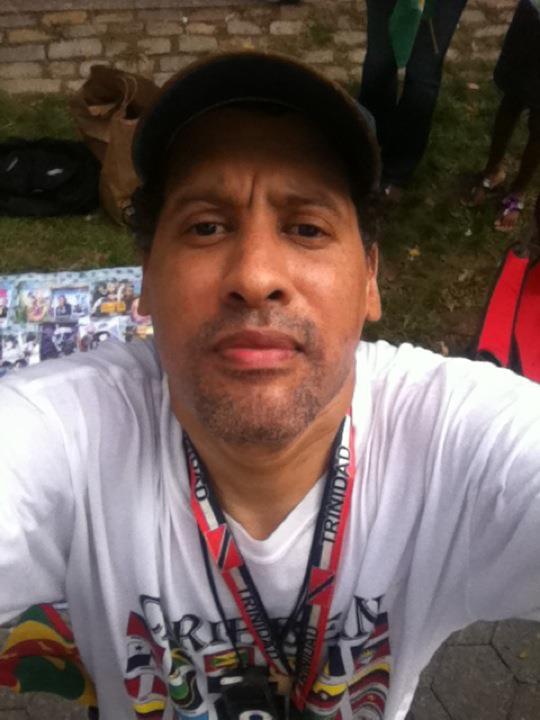 Remembering Michael Hyman
By Jason A. Michael
(author of Strength of a Woman: The Phyllis Hyman Story)

I was very blessed to have been able to interview all six of Phyllis’ siblings for my book, Strength of a Woman: The Phyllis Hyman Story, Phyllis’ authorized biography. Michael had some unique perspective. He and his twin sister, Anita, were the babies of the family, several years behind Phyllis. But he had also stayed with his big sister for a time when he moved to NYC in the late ‘80s. At the time, Phyllis explained to him that although they were siblings, she felt she didn’t know him. Michael set out to change that immediately. “Think of me as a piece of gum on the bottom of your shoe,” he told her. “I’m not going anywhere.”

Going back to the beginning, Michael’s early memories of Phyllis included the time he and Anita were playing with matches in Phyllis’ closet and accidentally set some of her clothes on fire. Phyllis’ mother was so worried about what she would do when she came home that she hid the twins. Phyllis wasn’t having it. She wanted to talk to the twins – and she did.

By the time Michael was a teenager, Phyllis was living in Miami, where she’d meet her future husband, Larry Alexander. When he was 15, Phyllis flew Michael and his older brother Mark to Miami for a visit. She lived, at that time, in the Miami suburb of Coral Gables. Michael recalled that Phyllis would make them scrambled eggs for breakfast. In the evenings, he got to tag along with Phyllis to her regular booking in Ft. Lauderdale, some 40 minutes away.

There he got to know the boys who comprised the P/H Factor and a lifelong love of music began. Mark Egan, Phyllis’ bassist, lent him a flute and he self-taught himself. (He would later switch to clarinet in high school and finally settle on the alto sax.) On this trip, Michael got his first real glance at Phyllis on stage, as a performer and a leader of a band. “It was amazing watching her interact with an audience and how they responded to her,” he said. “You could see that she had a tight band, the P/H Factor. I cherish those memories.”

It would be more than a decade later before Michael visited Phyllis again, this time in New York. It was his first time in the Big Apple. “I tell you, man,” he started, “New York, for a kid like me, I just remember being so fascinated. I mean, just the fact that she lived on the 33rd floor in this beautiful building on the corner of 56th and Broadway. I was impressed. Her apartment wasn’t lavish. I know a lot of my friends used to think that Phyllis had this lavish apartment. I used to tell them that isn’t quite the case. She could have. I think my sister got a little too comfortable. She didn’t like change too much, as far as her personal living space. She got so comfortable there. She really didn’t do too much improvement on the place. it was just there.”

Michael initially stayed with Phyllis for two weeks. Jim Lewis, Phyllis’ office manager, showed him some of the town and Michael was amazed to discover that people didn’t arrive at the club until after 11 p.m. He hung with Phyllis at a club called Possible 20. It “was between at 55th between 8th and Broadway. That was her place. That’s something you don’t want to leave out. That was Phyllis’ place to go because it was so close to the house. It was a place for musicians, actors and those people in the underworld.”

After his two weeks were up, Michael returned to Pittsburgh. But a short time later Jim asked him to return to attend his birthday party. Michael gladly accepted and while in town met a young lady who put the idea to move to New York in his ear. He quickly did, staying with Phyllis for his first few months in town. Keep in mind, Phyllis lived in a one-bedroom apartment. Her office, where Jim worked, was actually her living room, which doubled as Michael’s sleeping space at night. It was cramped quarters to say the least.

In September of 1987, Michael went with Phyllis to her gig at the Blue Note and she paid him for assisting her and Tad Fennar, her boyfriend and then road manager. “I liked him,” Michael said of Tad. “I thought he was cool. It was my first time seeing her with someone other than Larry. I met all her boyfriends. I can’t say there was any one of them that I didn’t like. Tad had a good mind of his own.”

Michael loved his sister. But he was not blind to her challenges. “I watched her treat people in a way that I really thought was really unnecessary. … There were times when I started voicing my opinion. And saying, you know, you need to check yourself. But by that time, you couldn’t tell her anything. But I would let her know that I didn’t like it. I would let her know that about the way she was talking to me sometimes. You don’t have to talk to me like that. That’s unnecessary.”

Jim, said Michael, took the worst of it. But all of those in the inner circle would become victim to her wrath at one point or another. “A lot of people caught so much hell from her. She was brutal. She really was. She could be vicious. I could never understand why she was so tough on people. I remember someone said, ‘Would you ever want to play in her band?’ I immediately said no. no way. I said, ‘You think I’m going to subject myself to that in the band and have her belittle me?’ I would never put myself in that position. Never. No matter how good I got I would never do that. If she ever asked me to, I would refuse.”

Michael said that at time “being around Phyllis was like walking on eggshells, because you always worried that you didn’t want her to blow up.” That’s not to say Phyllis was always an ogre. Quite the contrary, there was another side to Phyllis, likely the one that caused her crew to stick around. Michael recalled a time, just a few years before her death, that he went with Phyllis and her assistant and friend Lennice Malina, to see friend and songwriter Gordon Chambers perform.

“After that, me, her and Lennie went to this hole in the wall place, this dive, and we ate dinner. I remember we gave the waitress a $100 bill. So, we left. We caught a cab uptown. We get the near house and Phyllis goes, ‘Where’s my change?’ And I looked at Lennie, Lennie looked at me. She said, ‘Who’s got the change?’ I said, ‘None of us got it.” This might have been enough to cause an uproar. But Phyllis was in a good mood. “She busted out laughing. We were all laughing in unison.”

Good times with Phyllis were more than that. They were great. Michael was with Phyllis at a show in Ohio one year for his birthday. “I didn’t expect her to do anything. Next thing I know, she had a cake for me, and she had all the band members sign a card. Doug E. Fresh was even there, and she had him sign the card, too. She would do things like that.”

Another time, Phyllis had invited her friends from Baltimore, the Barrys, to come to NYC to see her. “We cooked fried chicken and everything. She ordered a limousine. We drove from her house all the way to the zoo. We parked at one end of the zoo, and we walked. Phyllis got tired so she had me call the limo driver to meet her on the other end. And we got to the end, and we just got in the car and ate. It was fun.”

There was a period of about two years that Michael and Phyllis did not speak. Michael got married and Phyllis didn’t approve of his wife, a former personal assistant who Phyllis felt was just trying to take her last name. The two eventually reconciled at a family wedding. They also were together when their mother died in 1993. Phyllis, Michael said, felt “tons of guilt” when her mother died. The two had had a complicated relationship virtually all of Phyllis’ life.

Though Phyllis was struggling in her latter years, Michael recalled she had mellowed a bit and he has many good memories from that time, including escorting Phyllis to singer Dan Hartman’s memorial and going with his sister to see her last boyfriend William Earl Ray in an off-Broadway play.

“I used to do anything to try to make her laugh,” he said. “I mean, if it wasn’t me showing Martin Lawrence or watching a Cosby Show or just bringing in some comedy stuff. I used to love to make her laugh because I really felt she didn’t laugh enough. I mean, she did, but I just liked making her laugh. We had some good times. We really did.

“I mean, I owe Phyllis everything,” Michael continued. “You know, everyone looks at their life, where you have your turning point. Where, if this doesn’t happen then I don’t end up here. And I mean Jason, I ask myself many times, what would have become of my life if I hadn’t come to New York. And it’s not a very pleasant thought because at 16 I got involved with drugs, with marijuana. … I think that if I had never moved to New York, that was the time the crack craze just came about. And I remember leaving before it hit Pittsburgh. I heard horror stories. I remember coming back to visit and looking people up … some of my friends just lost it. They just became zombies. And she saved me. I think she saved my life. I really do. She’s the reason why I’m into music. I don’t know what my life would have been like in Pittsburgh. But I don’t think it would have been very pretty.”